I departed Albuquerque around 9 a.m., heading south towards Socorro on interstate 25. The sun was shining and creating a haze at the foot of first the Sandia Mountains, followed by the Manzanos further south. By the time I reached Socorro the haze had dissipated and opened up a relatively cloudless sky. The drive was pleasant, little traffic met me on the interstate, and I was excited to turn off onto Rt. 60, cutting across West-Central New Mexico, an area I had not explored before.

As I drove I saw gray velvet clouds off in the distance, swallowing the Magdalena range. I stopped at a magnificent canyon called the Box I’d heard of from rock climbing friends. The silent site filled me with excitement around the wild and silent areas I would encounter throughout the tour. I passed by the Very Large Array, a system of radio telescopes I have always wanted to see. Not long after this I, too, was swallowed by the cloud cover. I watched the thermometer on my rearview mirror quickly tick down from 60 to 50, and finally resting between 34 and 40 degrees. The wind picked up to a gale and my little Eleanor was tossed around the road and I had to favor the right on my steering wheel as a result. Not long after snow began to blow from the sky, and continued to fall for the next couple of hours as I began to wind my way through the purple and gray mountains. Crossing the state line into Arizona, I was greeted by fields of white-gold buffalo grass as far as I could see. It offered a magnificent and stark contrast to the dark skies above. 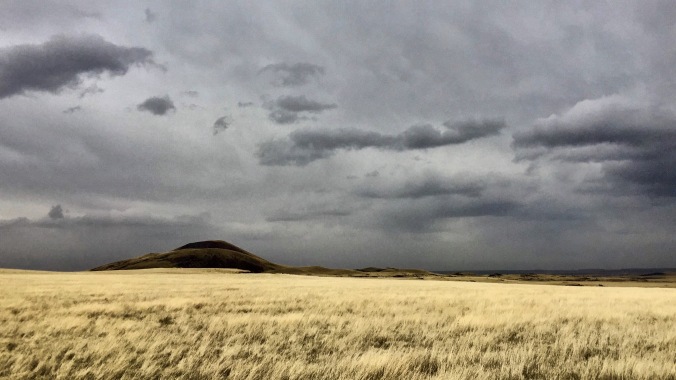 One of my favorite things about driving to Phoenix is how dramatically the temperature changes if you are approaching from the north. It can be 40 degrees in Flagstaff as you take the ramp onto I-17. You drop down from the 8-10k elevation of the north to the desert of the south. The iconic Saguaro cactus begins littering the hillsides and you know that it’s time to roll the windows down. After all, it’s 75 out there.

My approach from the central part of the state was a little different, although no less a dramatic landscape on my way into the Phoenix basin. It was the snowy, wet weather that hindered my coveted temperature rise. By the time I reached the outskirts of Mesa, just north of Phoenix, the sky had broken open once again, and the sun began to dry up any remaining clouds in typical Arizona fashion. I have never seen Phoenix so vibrantly green. The mesquite, creosote, and palo verde had feasted greedily on the above average rainfall of this past winter, and they were bursting with chloroform to show for it. The green was punctuated by the bright, goldenrod Chamisa that sprouted from the rocky hillsides, defying the need for adequate soil as desert plants often do.

I turned off towards the Tonto National Forest and within minutes I was rambling away from the bustle of one of our country’s most populated metropolises and transplanted into a wild corner of the state that I had never seen before, and I was reminded of why Arizona remains one of my favorite wild places. There are so many places one can get lost in Arizona, and there is a great variety of the landscapes you can access. I was headed towards Horseshoe Lake, following a deeply rutted and nerve-wracking road towards the Horseshoe dam, and the river below it. My car dipped and banked, slamming too hard, too fast, too many times into the canyons that were created in the unmaintained access lane. After what seemed like an eternity on that washboard, I came upon the campground I was to meet a friend at, and I found a site. When I emerged from my car, I saw that my rear, the drivers-side tire had popped, and my car sat sadly on the rim, digging into the soft earth. Poor planning on my part resulted in my tire jack residing in a compartment underneath Eleanor’s sleeping platform. Even poorer planning resulted in forgetting my knife, or any cutting utensil whatsoever, and that meant I couldn’t cut the industrial strength zip-ties securing my bed in place. Here I was, in the middle of the Arizona wilderness, with a flat tire and no foreseeable way to get what I need to fix it. There were no other campers nearby, and I could only hope my friend would come through and meet me as planned.

I sighed. I laughed. I said, “God dammit.” But that was it. No meltdown, no screaming, no frustration whatsoever. Just bland acceptance of the situation. I pulled my chair out and sat there, taking in the sights of the marshy banks of the creek that ran behind our sites, and I spied on several different types of raptor birds hunting their evening meal. The day turned twilight, and night followed. I began thinking that my friend wasn’t coming. Oh, well. I was just preparing myself for an intense walk the following day when headlights approached in the distance. Sure enough, it was my friend. We laughed at the situation and resolved to fix it in the morning. Too late for that kind of hassle.

We awoke the next day and fixed the tire quickly. I spent some time meditating on the banks of the creek. Birds sand all around me, the water roared, and my life felt right. To spite my flat, I went and purchase four brand new tires and headed to the gig.

This morning I awoke and made the three-hour trek to my special place. And the shine has not worn off. As I pulled off of I-10 and approached Cottonwood, an immense sense of relief and gratitude rose within my chest, escaping my mouth in a long and breathy sigh. I was back in my heaven, my rose. It turned out that the flora of Phoenix was not the only place to take full advantage of a precipitous Winter. The hillsides were erupting the same yellow gold. It was a blanket to the desert. I pulled over and looked closer: there were spots of orange, purple, green, and blue in addition. Red Claret-Cups emerged from their namesake cactus. It was astonishing to behold as I made my way through the park towards Indian Cove.

I parked at my site for the next few days and took a breath in, smelling the dusty creosote that surrounds my site. It will be in full petrichor at morning’s first light, as the dew settles and the day begins.