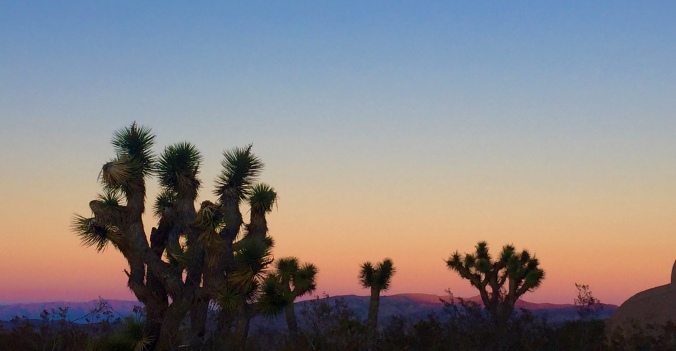 The smell of creosote greets me as I emerge from The Gray Haven (also known as Eleanor), my 2005 Honda Element just before dawn. I find myself about a mile southeast from the entrance to Saguaro National Park. Late last night I drove the serpentine Gate’s Pass Road following a show I played in Tucson. The pull-off seemed set in place specifically for me and Eleanor, and I marveled at the silhouette of the giant Saguaro cacti and the sharp edges of the Tucson Mountains in the moonlight. Sleep came quickly but was disturbed by uncomfortable dreams and paranoia caused by a circling helicopter with a spotlight. As a result, I was up before the sun and allowed to revel in the scent of the desert as the globe slowly crept over the mountains, turning what were mere lines the night before into a jagged vision punctuated by various cacti, brush, and rock.

After a brief morning hike, I began traveling north on I-10 towards Phoenix, that sprawling slab of concrete in the middle of the desert. The landscape of Arizona seems to be split in half by latitude about an hour or so north of its largest city. As I begin to climb the mountains on I-17  I watch the giant Saguaros seemingly wave goodbye to me in the rearview mirror and the topography moves towards the piñon pine and juniper forests of the northern half of the state. I pull onto AZ 89 and begin the traverse towards Jerome, a true wild west town that was built into the side of the mountains, reminiscent of towns in Spain and Italy, with a decidedly Americana feel. Beyond Jerome, Sedona. The setting of a disastrous attempt at healing-by-nature in the fall of 2014. It was very much a watershed moment in my life, and now I find myself again staring at the Mogollon Rim, just west of Sedona, in the Coconino National Forest.

I’m surrounded by the sound of a breeze traveling through the juniper, giving off a decidedly fresh scent. Different than the smell of the low desert further south, but a calming and pleasing aroma just the same. Mingled among the deciduous trees are reminders that this too is a desert environment. On a hike through the forest surrounding my campsite, I recognize prickly pear and a barrel variety of cacti, and I have to watch my path as sharp fronds of Yucca threaten to impale my shins and knees. Small burrows pockmark the ground. These could belong to any variety of creatures attempting to survive both the harsh heat of the day and the stinging cold of the high desert nights. I see a desert cottontail lope across my path a few feet ahead. It gives pause as we regard each other mutually, then skips quickly away. And now, the sun is setting behind me drawing a line of shadow in the hills surrounding the red rock of the Mogollon, edging ever closer to the rim. The moon is already high in the sky, about to break free of its adolescence for its monthly night of adulthood and fullness.

The desert, like most everything else in the natural world, screams with metaphor. But can a landscape serve as an archetype in the Jungian sense? I am more than enamored with the desert, I am more than inspired by it. I identify with it in a manner that one would normally reserve for another human being. I identify with the struggle to survive and the need to adapt more than anything else in my life, and certainly more than any of Carl’s suggested quintessence. More than that, I identify with the success of the desert. Not only the need to adapt and survive but the ability to do so under the most palpable adversity.

I live with severe depression. There are times when it waxes and wanes, but for the most part, it’s in the forefront of my experiences. Like the dirt and dust of the desert, it is a ubiquitous drone throughout my life. Rain comes in bursts of joy and happiness, contentment and peace, and when these showers arrive I soak them up and do my best to save them for future dry spells. I flower during these downpours, often exploding with creativity and love until there doesn’t seem like there could possibly be any left. When the joy and contentment clear I cleave to their memories with a desperation matched only by the cholla’s reservation of water. Those memories of how good things can get often pull me through.

St. John of the Cross coined the term “a long dark night of the soul” to describe the spiritual and emotional separation one feels when wading through upheaval and doubt, depression and anxiety. This is an apt and telling description of this experience, but I don’t think it holds as much water as the desert metaphor. The desert offers opportunities for change and survival, but one must recognize and take these gifts for what they are worth. The long, dark night only offers one option: Wait for the morning to break. I’d rather take my chances with action than waiting around for something to happen.

The sun has continued to set and something interesting has begun to happen. The shadow-line it drew 15 minutes ago is blurring and the hills are lighting up again. The rim is now enveloped in the precursor to night. Yet another show from the desert, another lesson. Change can happen even when it’s least expected. Maybe there is something else.